It was a sleepless night with biting cold even when packed in 4 layers. However, a strong coffee served with such care made my day. After breakfast, we had a briefing as to how we would be going about the day and the strategy for the summit. We were left free to rest for the entire day after the breakfast and we decided to pack stuff necessary for the night. I met the two guys who I mentioned earlier and remembered their advice to put on how many ever clothes possible as it is going to be so cold, almost impossible to imagine. I slept, sat, thought and whiled the time till noon. Post lunch we were demonstrated the use of aids-ice axe, crampons and gaiters and were distributed our set of devices. All of us practiced how we would put them on and how we would use them out there for a while and set them ready in the tents. I joined my bunch to play volley ball to stretch a little and to have fun! It was indeed a lot of fun with three teams fighting for a win. As the sunset, we all had dinner and were asked to rest. A wakeup call at 9.00pm woke us up. We were served hot soup and departure was announced to be at 10.30 pm.

Butterflies fluttered in my stomach for the entire day and just became unbearable as the departure time approached. I tossed around the entire evening imagining myself in the middle of the white mountains, walking relentlessly towards the summit and that gave me chills down the spine. I wonder if it was the same for everyone. Even though since the very beginning of the trek we had been hearing that not everyone could summit, not easy, very difficult, I was not sure what I wanted to feel. I just wanted to summit provided my body permits. My will never has let me let go of things especially of this stature and I decided to take one step at a time to reach the top. “A journey of a thousand miles must begin with a single step.” – Lao Tzu 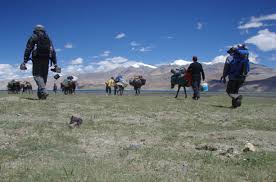 The summit walk began at 10.45pm led by the trek leader and pushed from behind by the assistant trek leader. I suffocated at the first ten steps. My breathing was stressful, could barely move my legs and clothes were too tight and sat down on the ground saying “No, something is not alright! I cannot do this feeling like crap”. Mr. Sandeep of TTH came handy when he decided I could survive if I take off a couple of layers of clothes I wore and walk lighter. It did help when I took a heavy coat off my body and let myself breathe easily. Sipping on water right there, I started off again. It took me almost 45 minutes to cover the first hill. I could see everyone already being there waiting for me patiently with their head torches pointing towards me once and again towards the summit route. After the initial breakdown, my confidence had a huge dent and I wondered what to do. I eased myself out at the top of the first hill before advanced base camp and pulled myself back into one piece. I knew I should not give up easily and that is precisely what I did. I started walking again. I had never seen so much snow in my entire life and it freaked me out. The snow was fresh and legs started falling deep in the snow. Every single step I took had a background scream crying for help. I could count my every single step, breath and my heart beat. Someone asked me “are u scared or are u enjoying this?” When i thought of an answer, I realised it was both. If I was only scared I should not do it, but i wanted to. That was the first time Irealised what I was getting myself into and whatever it is i wanted to live it fully. I joined Sandeep and Raghu of our team on the way.

Every one of us having constant questions in the mind, but keeping all those queries at bay walking towards a single destination. After an hour long of walk, i had regained my rhythm of walking and gotten used to knee deep snow. Legs kept moving unconsciously as the cold breeze hit my face roughly. I could now see myself walking towards a moonlit silver patch of snow and that was the second stage of the summit trek. However, not knowing how dangerous it could be we started off on the glacier. The legs had started to fatigue and the biting cold had begun to freeze my toes. The walk on the glacier was not too steep, somewhere around 50 deg, hence did not prove too troublesome. Walking on the glacier for 2-2.5hours just prepared us for worse times ahead. As we rested on a big gravel pile, i took a look up at the summit and believe me I felt like a Lilliput in front of Gulliver. My heart sank into the dead regions of a sea. The climb from where we sat to the ridge of the summit was approximately 80degrees straight. Everything appeared like a dead end. Nevertheless, I decided I lose nothing if I start off and do how much ever I can. Trust me you lose track of time, place and all the people who you were with. All I could see from that point was summit, my guide and I. It was 12.35am precisely when we started towards the ridge and I asked how long approximately to reach the ridge and Stan Bhai said easily 5 am. I lost all the words I had and started walking. Braving all the odds of a strong breeze, freezing cold wind trying to push me down, a couple of trek mates taking a detour and my mind somewhere within asking me why do this I took my steps up.

Ten steps and bam! I needed to sit or rest to push myself up by ten more. I started off with ten steps but the knee deep snow wasn’t helping either. Ten decreased to two steps as I walked. The body was drained, but the mind started to push me harder than ever before. I remember what I said to Stan (my guide) in the middle somewhere, “Bhai, I don’t know. I might be the last person to reach up there. All I want to do is SUMMIT” The journey seemed impossible out there at a point of time. When your body gives way, and emotionally you lose all your composure you look for a support system. It was my guide who became my support. Every time I said Oh my God, I still have to do so much!” he said, “Anju ma, summit is what we are aiming at. Slow and steady, we will do it.” Those words were my strength and pushed me towards my aim. On the way to the ridge, I saw the transformation of the moon lit night into breaking dawn. You have to be a blessed one to stand in the middle of the snow clad mountain and see it transform into a golden beauty as the sun rose. However, that happiness was short-lived as the trek leaders hurried us more saying if we don’t push ourselves harder we will be unable to summit as the snow would start melting soon. At around 5.30 am I reached the ridge or the shoulder of the mountain. I looked back and I could not believe I was up there staring down at the path I tread and the distance I covered. The journey on the ridge looked small, but was scary as I had valleys on both my sides and I had to walk on a small area of about 4-5 steps. That is when my ice axe came handy. Seven of my teammates were already at the summit and I could hear them rejoice their achievement. That fuelled my desire to reach there more. I was past the ridge and I had the last ascent towards summit.

I heard teammates cheering for me from up there, so was my guide and the trek leader Raj Bhai “Brave Girl, common.” I was exhausted. I literally had to put every step ahead to hear my legs scream for rest and lungs screaming out for more oxygen. In the conflict of body and mind, mind won! At 6.30 am I was at the summit at 20,080 ft. I was literally on the top of the world. I had a hive- five festival at the top and we posed for a summit photograph with all of us screaming our lungs out, or what was left to be precise. We all could barely smile, leave talk at that point of time. I took a deep breath, congratulated fellow trekkers, and thanked GOD for blessing me with the will to do that.